For those of you who aren’t entirely up to date with the hypothetical idea of an “(anthropogenically) enhanced GHE” (the “AGW”) and its supposed mechanism for (CO2-driven) global warming, the general principle is fairly neatly summed up here: 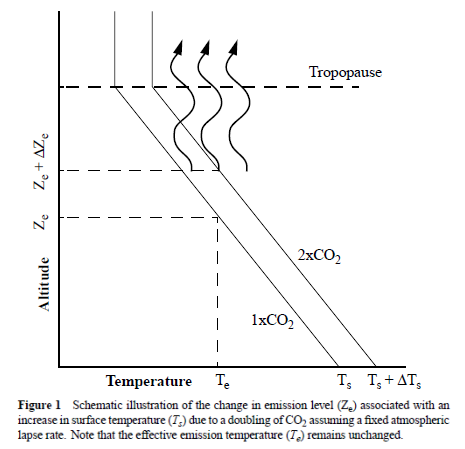 I’ve modified this diagram below somewhat, so as to clarify even further the concept of “the raised ERL (Effective Radiating Level)” – referred to as Ze in the schematic above – and how it is meant to ‘drive’ warming within the Earth system; to simply bring the message of this fundamental premise of “AGW” thinking more clearly across. END_OF_DOCUMENT_TOKEN_TO_BE_REPLACED

UPDATE, June 19, 2017: The new ‘CERES EBAF Ed4 Sfc’ dataset arrived in May. The updated version proves even more detrimental to the idea of an “enhanced GHE” than the older one. The average sfc radiant heat loss (net LW, OLR) in the Congo is now reduced from 51 to 34 W/m2, while the same flux in the Sahara-Sahel has increased from 103 to 107 W/m2. At the same time, the solar heat inputs (net SW, ASR) in both regions are now more or less equal: 173.6 W/m2. Which means that the tropospheric column above the Congo surface appears to restrict its radiant heat loss to less than a third (rather than ‘just’ half) of its equivalent flux in the Sahara-Sahel region. So with the same heat INPUT from the Sun, but with a radiant heat loss more than three times larger (!) per unit time than in the Congo, the Sahara-Sahel surface is STILL several degrees WARMER on average than in the Congo!

OK, so commenter “Norman” asked me at Roy Spencer’s blog to clarify my position on whether a “more IR active atmosphere” would necessarily produce a higher average annual surface temperature at the bottom of that atmosphere. His inquiry in full:

Then you would also agree that increasing GHG in the atmopshere (the quantity makes a difference since it decreases the heat out) will lead to the end result of a warmer surface?

Good. That is what the basic point is all about.

Does the amount of GHG in the atmosphere change the equilibrium temperature of the Earth’s surface?

In your other writings you have states some GHG is necessary but the quantity does not matter. what is your current understanding?

More GHG warmer surface?
Less GHG cooler surface?
Or No change once a certain amount is present?
If in both cases the solar flux to surface remains the same.

So what do we mean by a “more IR active atmosphere”? Well, a proponent of the AGW idea (that of the anthropogenically “enhanced GHE”), like Norman here, would simply say: more “GHGs”. But what does this actually entail? It would lead to an atmospheric column that is more opaque (that is, less transparent) to outgoing surface IR. The idea is that the so-called “GHGs”, the IR active gases (and clouds, mind you), would absorb it more strongly, sort of “capture it” on its way out, and reradiate it in ALL directions, not just the upward one, thus diminishing the net flux of IR moving away from the surface and in the direction of space. And what is this net flux of outgoing IR from the surface? It’s the surface radiant HEAT loss, its Qout(LW).

So Norman’s central claim is this one: “(…) increasing GHG in the atmopshere (the quantity makes a difference since it decreases the heat out) will lead to the end result of a warmer surface (…)”

Well, will it? What does empirically based data from the real Earth system have to say about it?

We return to Africa. END_OF_DOCUMENT_TOKEN_TO_BE_REPLACED

Specifically how is the AGW mechanism for global surface warming supposed to work? How is the global “ocean heat content (OHC)” supposed to be increasing under a strengthening “radiative greenhouse effect (rGHE)”?

By reducing the surface’s ability to cool via thermal radiation (IR).

Assuming the mean solar input [Qin] stays the same and assuming changes in evaporative-convective losses [Qout ev] only ever come in the form of responses to preceding “greenhouse”-induced warming, that is, these losses stay constant until such warming occurs, then the only mechanism for warming (of surface and/or ocean bulk) is a reduction in surface radiative losses [Qout rad], i.e. in the ‘radiant heat loss’ or – same thing – the ‘net LWIR flux’ coming off the surface:

When less heat goes out than what comes in, warming ensues. It’s that simple …

This is the theory.

Now, do we see this AGW warming mechanism at work in the Earth system today? Can we observe it empirically? Can we follow in the available data the ongoing strengthening of the rGHE resulting from our continued fossil fuel emissions?

In fact, we observe the exact opposite of what the theory above says should happen! END_OF_DOCUMENT_TOKEN_TO_BE_REPLACED